From an Abandoned Child, to an Angel in the Sky - The Limuel Hayag Vilela Story 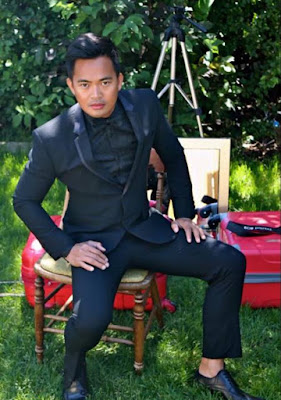 “Circumstances don’t make the man, they only reveal him to himself”. – James Allen

Challenges in life can impact us in two ways. It can break us, or it can mold us to become better individuals. Those who run from life’s challenges become forgotten, and their life’s potential are buried with them once all is said and done. But there are individuals who rise to life’s challenges. They use both their victories and defeats to improve themselves so they can pursue their dreams. They don’t give up. They confidently face
the future. These are the people that will be remembered, and their story will be a source of hope and inspiration for many.

One such person I know is Limuel Vilela. Although still quite young, Limuel has already accomplished much in his life. He overcame circumstances that many people would not live through. His personal triumphs is an inspiration that has touched many people in countries where he’s lived. Personally, I am inspired by his story.

Limuel’s story starts back in his home town of Pagbilao in the Province of Quezon, Philippines. When he was six years old, his mother and father abandoned him along with his three other siblings. To survive and get an education, Limuel lived in different homes, becoming a “katulong”, or a houseboy at very young age. When a family could no longer support his education, Limuel moved to another house, fulfilling his role as a “katulong” while studying hard at the same time.

From a very young age, Limuel valued education. Somehow he knew then that this was his ticket out of being a houseboy. Limuel said, “I didn’t have parents, but I pursued my studies. If a family could not send me to school, I moved to another family that could so I can survive and study.”

It didn’t get any easier for Limuel during his high-school days. He moved to another house as a houseboy, fulfilling his duties while studying at the same time. Limuel said, “I ate using a different plate, drank from a different cup, and I had to work first before I could study. Oftentimes, I felt rejected. But I continued to study even though I was tired all the time.”

Many in Limuel’s hometown wondered how he was able to continue studying given his circumstance. Youth in his situation could have easily turned to crime or drug addiction, or give up on life altogether. But Limuel persisted, enduring many hardship while focusing on his studies. Limuel said, “I remember in one house, I had to sleep outside where the dogs slept during a storm so I could keep watch of the construction material for the house. Life was difficult, but I focused on my studies. I promised to myself to create a better life for me and for others when I finish college. So I persisted.”

True to his word, Limuel did persist. Again, as a katulong, he worked and studied hard at the same time. Not only that, he founded several student organizations in his school, eventually becoming a student president of his university, and was awarded as most outstanding leader. He received scholarships for his leadership which allowed him to stop working so he can focus on his studies. But he also mentored his classmates in exchange for lunch or dinner because he didn’t have enough allowance. His hard work and persistence paid off. Limuel graduated Magna Cum Laude. “When I graduated, I cried. I saw my father at the ceremony, and I dedicated my award to him,” said Limuel.

After his university days, Limuel worked in KFC in the Phillipines, United Kingdom, and Canada where he held management positions on the restaurants he was employed in. “I started from the bottom, and worked my way up to the management level,” said Limuel. Because of his dedication and hard work, he received these several prestigious awards:

1. Impossible Is Nothing Award – Given by the President of Yum International Canada
2. Top 1 Restaurant General Manager Across Canada
3. World Class Business Operator of the Year
4. Business Excellence Award

Limuel didn’t stop there. He continued to develop himself mentally, and physically. Eventually, he pursued a career in the airlines industry, becoming a Flight Attendant for Westjet Encore of Westjet Airlines LTD, one of North America’s largest, safest, and best airline company. “When I was young, I always stared at the sky, dreaming that one day I would fly. And now here I am, from a Temporary Foreign Worker to a flight attendant. I’m helping people, and I’m inspiring my fellow Filipinos that fly with Westjet. I tell them not to give up on their dreams,” said Limuel.

Today, Limuel continues to inspire people. He is a dedicated public servant. Even though he is thousands of miles away from his home town in the Philippines, he continues to reach out to them, encouraging them, and telling them to persist. Limuel said, “I want to tell my story to the all the Filipinos because I want to give back my experience to them. I want them to be strong in mind and heart. I came from being an abandoned child, to becoming a Flight Attendant. If I can do it, they can as well.”

Does circumstance make a man, or merely reveal who he is? Limuel taught me that there will always be difficult circumstances in life, but how we respond to them is a choice, and the choices we make reveal who we truly are. In Limuel’s story, the abandoned child persisted and eventually chose to become an angel in the sky.

------------------------------------------------
Abel Pagaling is the TFCC Communication and Program Lead. He manages a team of business analysts with a major Canadian insurance company. He is also an entrepreneur, a writer, a community servant, and a motivational speaker. He is passionate about personal development and leadership. Email: abel.pagaling@gmail.com Twitter: @abel_pagaling Facebook: www.facebook.com/abelpagaling1
Posted by TFCC - The Filipino Champions of Canada at 21:43

TFCC - The Filipino Champions of Canada